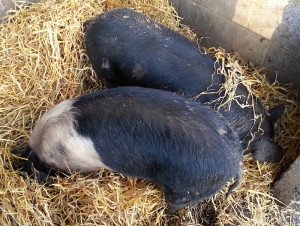 As the day of reckoning approaches for the two pigs, it’s time to see how well they’ve been growing. My usual aim is to produce pigs that weigh roughly 60kg at six months old. And while it’s still just about possible to hefting a creature of this size, I’d be doing little more than tormenting the poor piggies.

This is where, in the absence of an actual pig weighing machine, a tape measure and a calculator come in handy. All you have to do is measure the length of the pig’s body (from between the ears to the point where the tail starts) and its girth (around the body, just behind the front legs). With these measurements, you can get an estimate of the pig’s weight.

Handily, I’ve had a calculator made so you (and I) can just shove in those numbers, either in inches or centimetres, and get an estimated live weight AND carcass weight (i.e. after it’s been… emptied at the abattoir).